What happens when you’re flexible and just go out there to see the world? You realize that traveling can actually be cheaper than staying at home.

If you break it down the two biggest costs of travel are: accommodation, food and transportation. How do you optimize your costs? As for accommodation, hostels ($15–$20/bunk bed) are the cheapest option (after your buddy’s couch). Food: buy groceries and prepare your own meals as much as you can. Now, transportation: this is where you can save the big bucks if you do it right. Our advice: compare not only flights but also buses and trains. Find the cheapest routes and build an itinerary on top of the deals you find (not the other way round).

In our sample itinerary we use London as a starting point but you can pick any city on the list and just take it from there.

Ryanair is one of the cheapest airlines in the world and they fly to over 170 destinations in Europe. Fares start at less than $10.

The railway is quite popular all over Europe. Especially in Germany and Austria trains might be your best choice.

Our favorite website to compare different modes of transporation in Europe is GoEuro.de. Buses for that route start at $8 USD. Distances in Europe are small which makes bus travel convenient.

From Germany you can easily hop back into Austria on the way South to Italy. Praise for open borders! Enjoy the Austrian Alps and a romantic little town.

Again, board a bus and go South! It’s only a 6 hours bus ride. Again, we found the best deal on Flixbus via the travel site GoEuro.

Italiaaaaa… Pasta, bene, Pizza What would an Italy trip be without going to Rome? Yes, you have to be smart to escape the masses of tourists but it’s still worth it. Again we found the bus on GoEuro.

Ryanair’s got the cheapest flights, Barcelona’s got it all: sea, city and mountains.

On we go to the paradise island of Palma de Mallorca. Be prepared to hear German all around. Mallorca is the Cancun of the Germans.

Back to the mainland, Spain’s capital Madrid. Thanks Ryanair for flights cheaper than last night’s dinner.

Seville is the capital of southern Spain’s Andalusia region. It’s famous for flamenco dancing , particularly in its Triana neighborhood.

And off we go to Portugal. GoEuro helped us find a $14 USD bus to the beautiful coastal city of Faro.

This is the $20 Train we found from Faro to Lisbon, the capital of Portugal.

The city of love (and cheap flights)! Welcome to Paris. This is the Ryanair flight we found on Google Flights.

Back to GoEuro we found a $9 Bus to Le Havre. Head North and explore picturesque beaches, little towns and viallages. Also Normandy’s D-Day beaches and cemeteries are within reach.

A GoEuro search and $25 later you’re headed to Brussels, Belgium. Time to splurge on Belgian chocolate and waffles .

Oh my gosh. It won’t get any cheaper. Fly from Brussels to Copenhagen for the cost of a drink in San Francisco. Ryanair … again (here’s our sample search)

We’re headed North! Sweden is just a bus ride across the Øresund Bridge from Copenhagen. Like always we found the connection on GoEuro. Just look for the best connection.

Though often caught in Stockholm’s shadow Göteborg actually has greater appeal for many visitors than the fast-paced capital. We get there by bus, again found on our favorite site GoEuro.

Another bus ride and we’re in Norway.

Another budget airline that should be on your radar when traveling Europe and also internationally is Norwegian Air. They blew our mind whenever we found a San Francisco — Amsterdam flight for $200 and Prague — Boston for $150. Insane. This time we found a $30 flight from Oslo to Amsterdam. Here’s the link to the sample itinerary.

Another great mode of transportation in Europe is carpooling. It’s safe and well organized. Check Blabla Car Car Pooling. We found a ride for $14 to Prague.

Poland is beautiful and cheap. $9 USD for a bus to Warsaw. Incredible. PolskiBus found on GoEuro but it even gets better….

This almost seems like an error but we double checked… PolskiBus offers fares starting at $0.25. Found on GoEuro.

After these $1 buses the $11 bucks almost seem expensive 😀 Budapest blows us away. What a city. Definitely a hidden jewel in Europe.

We take another bus and arrive in Croatia’s capital city Zagreb. Around the city there’s lots of things to do. You could even head to Krka National Park if you’re up for a 5h bus ride.

From Zagreb head to neighbor country Slovenia. The country is only inhabitated by about 4 Mio. people (one of them used to be the US First Lady Melania Trump). Stop by Slovenia’s plitvice lakes if you can.

From Ljubljana Venice is only a $20 bus ride away. Take the chance!

canals, love and the smell of fish

How to book: If our sample searches don’t work or the dates don’t fit just go to Google flights, Skyscanner or GoEuro and play around with the dates a bit. You should be able to get pretty the same prices. We’ll leave it at that. We gotta go (off to Europe).

Some weeks ago we travel hacked a trip around the world for less than $1,000. Get instant access to the itinerary by subscribing here! 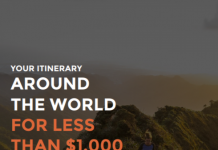 Whitepaper – How to Go on a Trip Around the World for Less than $1,000

The Funniest Travel Photos Ever Taken at Salar de Uyuni

5 Travel Apps I Found Most Useful on My Cross Country... 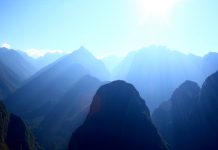 We’ll Show you the Cheapest Way to Visit Machu Picchu 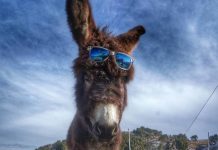 South East Asia on a Budget: How to Travel 15 Cities... 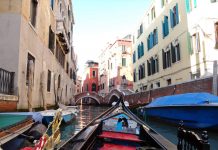